skip to main | skip to sidebar

You will be missed Jennifer Rardin

I received a message yesterday that one of our favorite authors; Jennifer Rardin, (author of the Jaz Parks books)passed away on Monday.

My heart goes out to all of her family and friends.
Posted by Lindsay at 9:26 AM 2 comments: 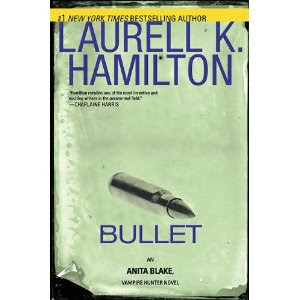 I did it again. I read another Anita Blake book. Intervention anyone? They are so bad, yet they are such a guilty pleasure. And Bullet, released June 2010, is a lot better than Flirt, which was released just a few months prior. Flirt just seems like a little novella to accent the rest of the books (although I'm not sure how much accenting was actually done).
Bullet has all of the recent Anita drama - orgies, Marmee Noir, bad guys, new guys, etc., but LKH added a little plot twist about the were lions. Honestly, it seemed like most of this book was just orgies, all the sex scenes had at least 3-4 people, or maybe not "people."
The storyline still centers around Anita being all powerful, or at least the progression of her getting to be so. But, I hate to admit it, but I ALMOST, NEARLY got teary eyed (note: there was no watering of the eyes, just almost), during a part... and oddly maybe a second scene as well.
Still, I do not care for the fashions or styling of the books. A see through dress is NOT a must have for this season, ankle-length hair is not sex, and regular black jeans? The only black jeans I ever see are skinny jeans on teenagers. I think authors should start paying more attention to what's in style (Pam - this is a nod for your character as well). It's really minor, but for whatever reason, it bugs me.
Speaking of things that bug me, there was a side plot to this story that was kind of annoying. SPOILER - She gets a call for cop business, there is some bad vampire stuff in another state, she tells them how to deal with it, they deal with it, the end. It was almost an after thought, and didn't quite fit.
I am a bit disapointed that there isn't a show or movie coming out. The first Anita books would be great to see on TV. Here's LKH talking about... old news, but forgive me, I'm behind!
Posted by Lindsay at 5:59 PM No comments: 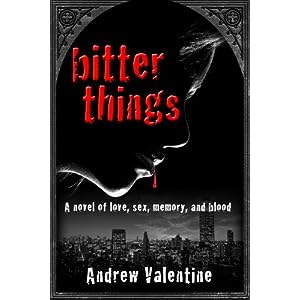 If you remember, some time ago I listened to a radio interview with Andrew Valentine, author of Bitter Things a novel of love, sex, memory, and blood. I was intrigued by Valentine's theories on vampires so I was interested in reading his new vampire book.

Michelle and Scott are a married couple, very much in love, despite Scott's baggage from his childhood. One night they decide to take things to the next level: they invite a beautifully seductive woman to share their bed. Mysteriously, Scott and the woman are no where to be found when Michelle wakes up.

Michelle will stop at nothing to find Scott, but is Scott strong enough to survive the evil that has taken him?

Bitter Things is not your typical frilly vampire romance. It's not just a sappy love story with fangs. Bitter Things explores the deepest and darkest corners of dark desires and control. Torture, sex, control and sacrafice; what would you do for the one you love?

Bitter Things also differs from various romance novels in the fact that it has substance, gritty, dark substance. The plot does not take you on a crash course in "love at first sight, sex, fight, sex, happy ending" there is much more involved in the story line.

I honestly had trouble reading through it quickly, or even getting through some parts of it at all. I was angry and frustrated at characters and events and some parts I thought were even a little frightening and disturbing. This book was a nice break from the usual sugary-sweet books I have been reading.

Michelle must work hard to find Scott, and Scott has to work even harder to keep himself. Will they find a miracle to be together once again? Will their love concur evil? You must read Bitter Things yourself to find out!

Posted by Lindsay at 8:57 PM No comments:

How the Vampire Boom Really Began

PR Team,
As we talked about last week at the annual retreat, it seems like we haven't made a significant PR push in quite some time. Buffy THE TRAMP LIAR-SAYER has finally gone off the air, but we are at a cultural crossroads. Vampires need to be the "next big thing." Ideas? Thx.

Fritzie,
I've heard that an up and coming novelist is planning a romance series (set in the Pacific Northwest, I believe) in which a girl is caught between a werewolf and a clown. I'm wondering whether, with proper outreach, she could be persuaded to replace the werewolf with a vampire. I think a battle for the heart of a young woman between a vampire and a clown could be very compelling and could help change our image with young women. Thoughts?

Steve,
Do it. Please report back. Thx.

Fritzie,
Talks went well. Very promising. She's receptive. Interesting twist. She suggests using the vampire in place of the clown instead. Werewolf/vampire face-off. What say you?

Steve,
That's fine if that's what she wants. Vampire/werewolf seems like an unfair fight, as readers cannot be expected to believe a werewolf could compete with the innate sex appeal of a vampire. Clown might seem like more worthy romantic opponent, based on perception (false, in my experience) that clowns have a great sense of humor, but again, if that's what she thinks, it's certainly worth a try. Thx.

Fritzie,
As you know, the manuscript we saw last week has been returned to SM with edits. I'm having difficulty selling her on your idea, even though I like it. She seems to think that having the vampire (currently named Booger, but that's not final) sparkle in the sunlight might come across as, as she put it, "over the top." She's also having some trouble shifting entirely away from some of the aesthetics she originally had planned for Booger as far as his look; we are working on it. Still negotiating re: this point.

Fritzie,
As you know, the book is now a runaway success. There will be more. Also tentative upcoming HBO show TRUE BLOOD based on those Snookie (?) books your wife likes, and a deal with the CW (it's the "fifth network") for a show called VAMPIRE DIARIES. Sounds super sexy. All looks good.

Now seeing ads for Vampires Suck. "Suck"? What's going on in PR? Lead of this movie appears to be takeoff of Edward/Booger character, seems to be making vampires into jokes. VAMPIRES ARE NOT IRONIC, STEVE. Parody/irony are bad for our sense of menace. Also hearing MTV plans new Teen Wolf. Where is our marketing plan? Where is our response? I expect to meet with you and the team in the conference room at 10:30. BRING NEW IDEAS. THX.
Posted by Lindsay at 1:49 PM 1 comment:

So, I gave in and checked out Laurell K Hamilton’s one of the newer Anita Blake books – Flirt. Honestly, until I looked up the book to include the hyperlink, I didn't realize there was Bullet - a book that is much longer, released about a month later. Where does that one fit in? I've been out of the loop.

Last year's book, Skin Trade, I thought things were getting better. There was only like, 2 sex scenes in the whole book! And it’s not even really about the sex. If the story line is good and the sex emphasized the story, and added a little flair, fine. But it is just over the top. And remember Micah?, that was bad. It was a little novella. A mere side story. Flirt was the same way! It was less than 160 pages. I read it over my lunch hour! It was practically a short story. And not a good one at that.

Anita turns down a rich guy – she won’t raise his wife, can’t raise her to be real.
Anita goes out and flirts and Hamilton makes things really awkward between her 3 guy friends.
Anita turns down a rich lady – she won’t raise her husband so she can ax murder him.
Anita goes to lunch at the same place, has awkward flirting with the waiter.
Anita is taken by two lions.
Her lion wants to mate with them.
They manage to make it over to the rich guys’ house – he hired them to threaten Anita and all that.
Her lion wants to mate with them again.
Anita gets hurt.
Anita must get power to heal – Anita must have sex
Anita takes power over lion #2 by having sex with him.
Things get a little violent
Anita raises the wife – but there is a ton of power
Anita raises lots more zombies.
Anita has zombies kill the rich guy.
Anita’s guys come to the rescue
Anita takes lion home with her.

They barely talk about Jean Claude, and only mention Asher in passing. None of the other characters barely even have roles in the book. It’s just all-powerful Anita. Like always. But Hamilton did work in Anita crying in there… you know, to show you that she is more than just a tough gal.

Hamilton also included an intro and an ending “how I come up with ideas” portion… probably to make the book longer because it’s pretty obvious she is running out of material and had to meet a deadline.
Posted by Lindsay at 1:44 PM No comments:

This is long over-due. Below or some drinking game rules if ever you are forced to watch Twilight or just want to get drunk with a bad movie you can easily make fun of. Lists are compiled through conversation and various other sites.

Remember - never drink and drive and don't drink if you are under the age of when you can legally drink. Be safe folks :)

Twilight Drinking Game: Will need a sober driver or to stay at home

Now, these are obviously just a few things you can drink to. So if you have to watch Twilight, at least be intoxicated and have fun doing so.

Posted by Lindsay at 5:14 PM No comments:

Just got back from San Francisco

Got back this evening from working in San Francisco, so I thought I would include a few San Francisco Vampire links;

The most important vampire link, by far, is to the site of THE vampire tour of San Francisco.

From their site:
Are you a San Francisco history buff? Are you a vampire buff? Did you ever think those 2 subjects would be combined? About 85% of the tour's script is documented San Francisco history. The other 15% - you'll just have to take my word for it. See if you can figure out what the 15% is! PLEASE FEEL FREE TO JOIN IN THE "SPIRIT" OF THE TOUR, AND COME IN COSTUME!!

Want to try something a little sexier and a little darker? Have a night out at one of SF's gothic clubs - maybe the night will have a vampire theme, or maybe you just might find someone who bites...

and if you want to stay in for the night, how about reading up on the famous case of the opium vampire?
Posted by Lindsay at 7:18 PM No comments:

Lindsay
Psychology Grad and avid reader. I love bare oak trees, paranormal mysteries, and dreaming. I love to review books, so if you need anything reviewed, feel free to email me at bookswithabite@gmail.com


View my page on Dark Side of the Net